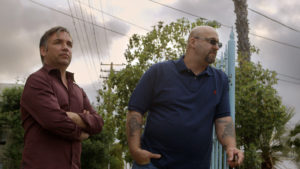 As a 13-year-old, Matthew Boger was thrown out of his home for being gay. While living on the streets of Hollywood, he was savagely beaten in a back alley by a group of neo-Nazi skinheads. Boger managed to survive the attack and escape life on the streets. Twenty-five years later, Boger found himself in a chance meeting with a former neo-Nazi skinhead, Tim Zaal. The two men soon realized that they had met before…Zaal was one of the attackers who beat Boger and left him for dead.

With their worlds turned upside down, the two embarked on a journey of forgiveness and reconciliation that challenged both to grapple with their own beliefs and fears. Neither could imagine that it would to lead to an improbable collaboration…and friendship.

FACING FEAR retraces the haunting accounts of the attack and the startling revelation that brought these men together again. Delving deep into their backgrounds, the roots of the ideologies that shape how they handle the reconciliation process are exposed. Self-doubt, anger, and fear are just a few of the emotions they struggle through as they come to terms with their unimaginable situation.

Shot on location in Los Angeles, the film is the theatrical directorial debut for Jason Cohen. Edited by the award-winning Tom Christopher with cinematography by Svetlana Cvetko (Academy Award-winning INSIDE JOB), the film takes an introspective trip through the world of early 80’s Hollywood while delicately addressing past events that shaped the men involved, from early childhood to their present relationship.