Violins of Hope Documentary Screening in the Orpheum Lobby 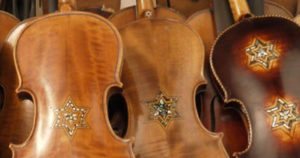 Tuesday, April 10 – 6:30 – Sioux City Orpheum Theatre Lobby
Screening of the PBS documentary Violins of Hope
Violins of Hope: Strings of the Holocaust, narrated by Academy Award-winner Adrien Brody, is a documentary featuring Israeli second-generation violinmaker Amnon Weinstein and his efforts to restore violins recovered from the Holocaust. Some were played by Jewish prisoners in concentration camps; others belonged to the Klezmer musical culture, which was all but destroyed by the Nazis. Played before and during the Holocaust, the Violins of Hope instruments have been painstakingly restored and serve as testaments to the resilience of the human spirit and the power of music to lift hearts in even the most horrific of circumstances.