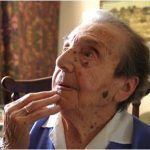 Tolerance Week partner Morningside College will host a screening of The Lady in Number 6: Music Saved My Life, an Academy Award-winning 2013 documentary-short film directed, written and produced by Malcolm Clarke. The Lady In Number 6: Music Saved My Life tells the story of Alice Herz-Sommer, a pianist who was the world’s oldest Holocaust survivor. She discussed the importance of music, laughter, and how to have an optimistic outlook on life. Herz died at age 110, one week before the 86th Academy Awards.  The short film will be followed by a discussion of the importance of music led by Sioux City Symphony Conductor Ryan Haskins.  The screening will be at 6:00pm on Monday, April 20, in the Lincoln Center’s UPS Auditorium, on the campus of Morningside College.

Alice Herz-Sommer was a rather unique individual. Living entirely alone in a tiny flat in central London she spent hours each day at her piano, practicing beloved Bach and Beethoven, for she was once a renowned and celebrated concert pianist performing to enthusiastic audiences throughout central Europe. But of course, all of that was before… before the ‘lights went out all over Europe’ and the continent was plunged into years of misery and bitter conflict.

During those years Alice suffered experiences that no human being should have to endure. She saw both her mother and her husband put aboard the transports to Auschwitz and yet even in her last days, she spoke of those times with an absence of malice and quiet grace that won the hearts of all who know her. Along with her six-year-old son, Raphael, Alice was imprisoned in the Theresienstadt concentration camp where her most enduring memories are of her helplessness and inability to feed her child or to answer his many questions about why they and so many others were being subjected to the indescribable nightmare of the Holocaust.

Yet Alice found a way to survive the terror of the camps – a means to look beyond the horrors of day-to-day life in order to recall and cherish what was joyful, pure and noble about her fellow man. Alice survived through music…