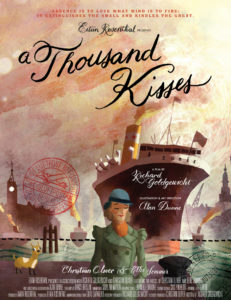 x City Public Museum
Midwest Premiere of the Animated Short Film, A Thousand Kisses
Lunch will be served, attendance is limited to the first 80 RSVPs to the Museum at 279-6174

A Thousand Kisses is animated short film created from love letters between a couple who were separated as the climate changed in Germany and Poland. The story gets incited by the new immigration laws brought upon by the Third Reich, forcing Moses, a Polish Jew, to evade Berlin in 1933. He proposes to his beloved Nettie that they leave together towards the more secure shores of South America, far away from Hitler’s reach. Though Nettie, being a Polish Jew from a ‘Germanic territory’ and therefore not quite required to leave the country, surprisingly feel most comfortable in staying, despite the need to separate from Moses. The letters that inspire the movie are exactly the love-letters written by Moses to persuade Natalia to join him, which were more recently re-discovered and translated from German by Eitan, Moses’ grandson, about some 80+ years later.